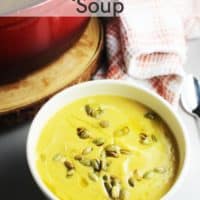 This creamy, healthy, roasted pumpkin pear soup is perfect for a cozy fall dinner. Roasting squash is about a million times easier than peeling and cutting it, plus it tastes better! Adding a couple of roasted pears gives it a nice sweetness, and using evaporated milk instead of cream makes this soup perfectly creamy and much healthier.

We've officially entered the season of Soup Every Week. Every single week when the weather turns cold, I make a large batch of some kind of soup - sometimes creamy, sometimes chunky - that we have for dinner one night and then bring to work for lunches for the next few days. It's easy and we always seem to be in the mood for soup. Doesn't hurt that it's usually a sure bet with the toddler too. 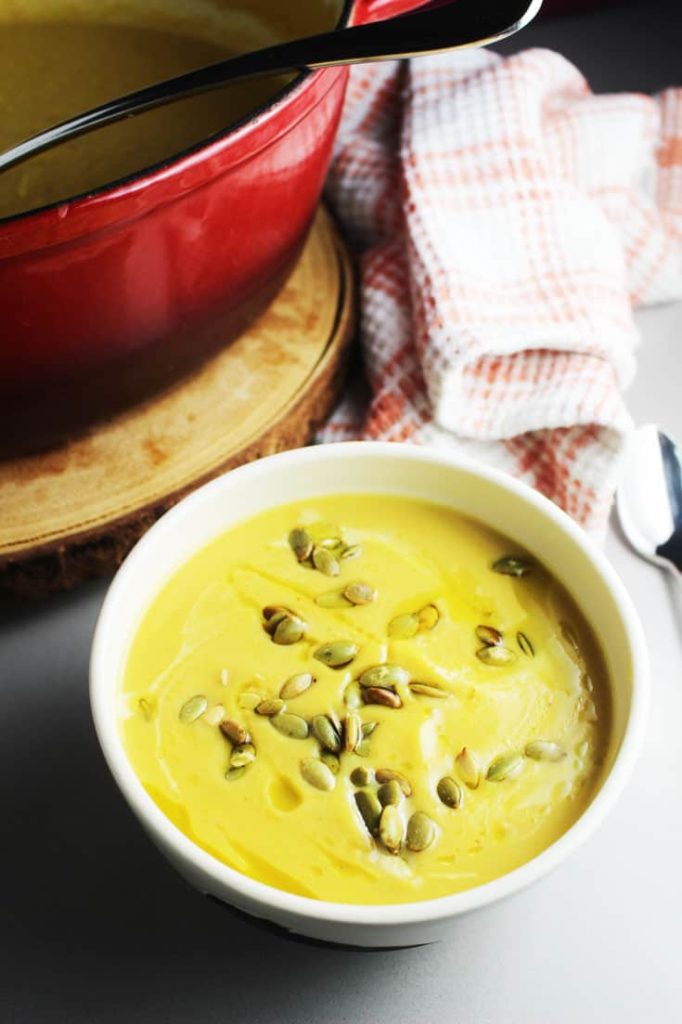 And since it's October, and pretty much pumpkin-palooza on the internet (no complaints!), pumpkin soup was the obvious choice. When I make a squash soup, I almost always add an apple for some sweetness to balance the savoriness of the squash. But since we're still enjoying some beautiful Ontario pears in the markets, I thought pear would make a nice variation on the theme. 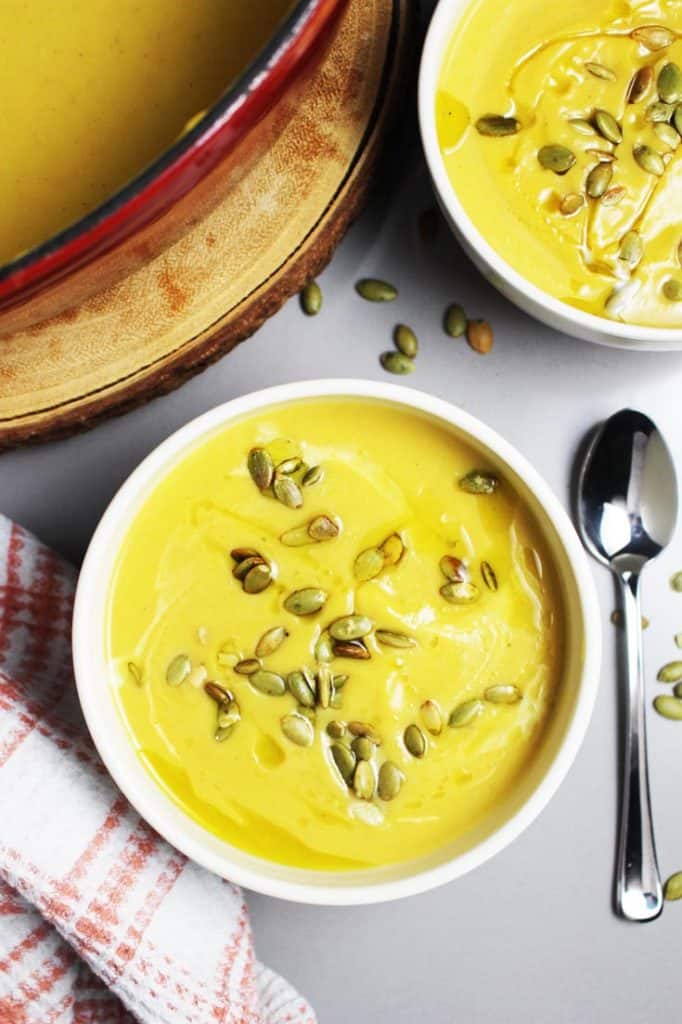 Naturally creamy soups like this one don't strictly require the addition of cream, but I often add it anyway as I find it makes the soup extra silky and satisfying. This time I kept it a bit healthier by using evaporated milk instead of cream. It's an easy swap that's also cheaper, and honestly you would never know the difference!

How do You Roast Pumpkin (or any squash)?

I used to peel and cut my squash when I made soup, but recently I started roasting it instead. It's a total game changer. Just cut it in half, and scrape out the seeds (save them for roasting!). Rub with a little olive oil and stick it in the oven for 45 minutes or so, until a fork easily pierces all the way through. Scoop out the flesh and you're ready to make soup!

I like to roast the squash over the weekend, while I'm preparing other things, and then keep it in the fridge for when I'm ready for soup. And as a pretty awesome bonus, it tastes better too! Nothing like roasting to bring out the flavor and sweetness of any vegetable. 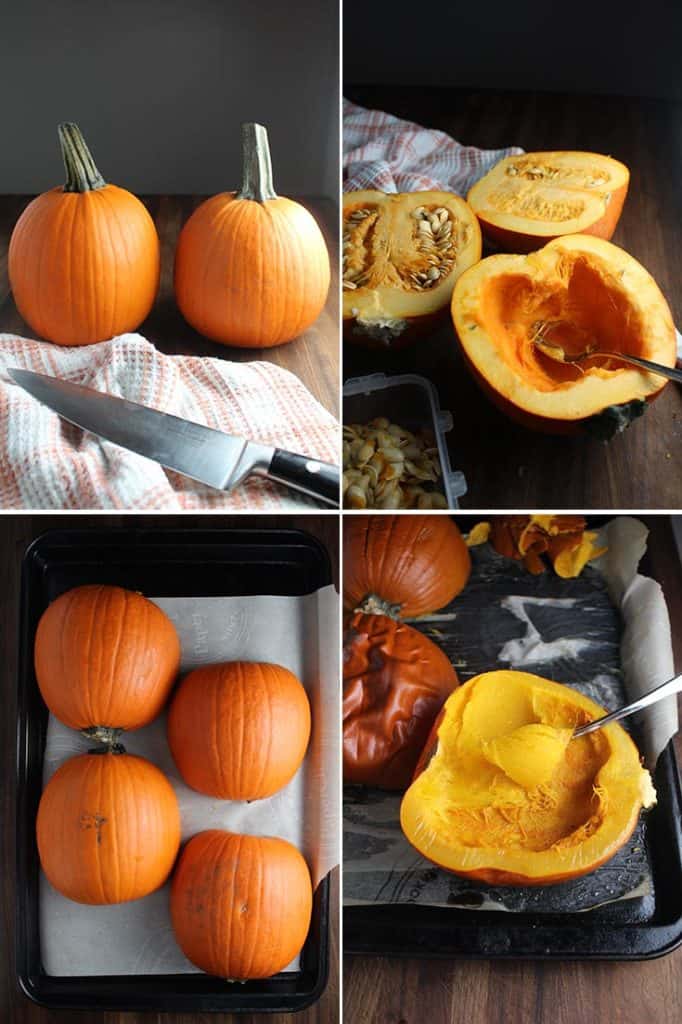 What Kind of Pumpkins are Best for Soup?

For cooking and baking purposes, the main thing is to stay away from the large jack-o-lantern pumpkins. There are many varieties of pumpkins you can use, and they are often generically labeled "pie pumpkin" or "sugar pie pumpkin".  The ones my grocery store carries look just like the larger ones, but are usually only about 2-3 lbs each. If you're lucky enough to have a farmer's market at you're disposal, you can find some beautiful heirloom varieties. See this guide for some examples.

I roasted my pumpkins ahead of time, so roasted the pumpkins and pears separately, but you can totally just halve and core the pears and put them on the same pan as the pumpkins. The pears will be done after about 20 minutes so just remove them when the are soft and beginning to brown.

While the pears are roasting, sauté some onion and garlic. Add a little cinnamon and nutmeg (I don't go to heavy on the spices as I don't necessarily want my soup to taste like pumpkin pie!). Add the pumpkin, pears, broth, salt and pepper, breaking up the bigger chunks with a wooden spoon. Simmer for a few minutes to let the flavors meld.

Purée the soup and stir in a little maple syrup, evaporated milk, and a little vinegar for balance and brightness. Garnish with crunchy roasted pepitas if you like!

Sound good to you? If you make this roasted pumpkin pear soup, I would be thrilled if you would take a pic and tag me on Instagram @ourhappymess!

Or pin for later!

A Few Other Favorite Creamy Fall Soups to Try 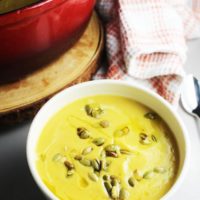