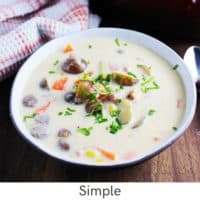 This velvety, hearty potato chowder with corn and ham is so simple to make and perfect for using up leftover ham. Evaporated milk replaces heavy cream for a lower fat option that doesn't compromise on flavor or creaminess. Bacon is a great substitute if you don't have ham!

Gregorian calendar aside, it's almost like Easter knew that spring was going to be late this year and decided to hang back for a while.

Back in March, we were still under 4 feet of snow and it seemed like April showers and May flowers were a long time coming. Now we're finally catching a glimpse of decent weather and I, for one, am doing a happy dance!

If your Easter celebrations involve ham, you will undoubtedly end up with a *few* leftovers. Don't worry, I have just the recipe for you: creamy, cream-less potato chowder with corn and ham! 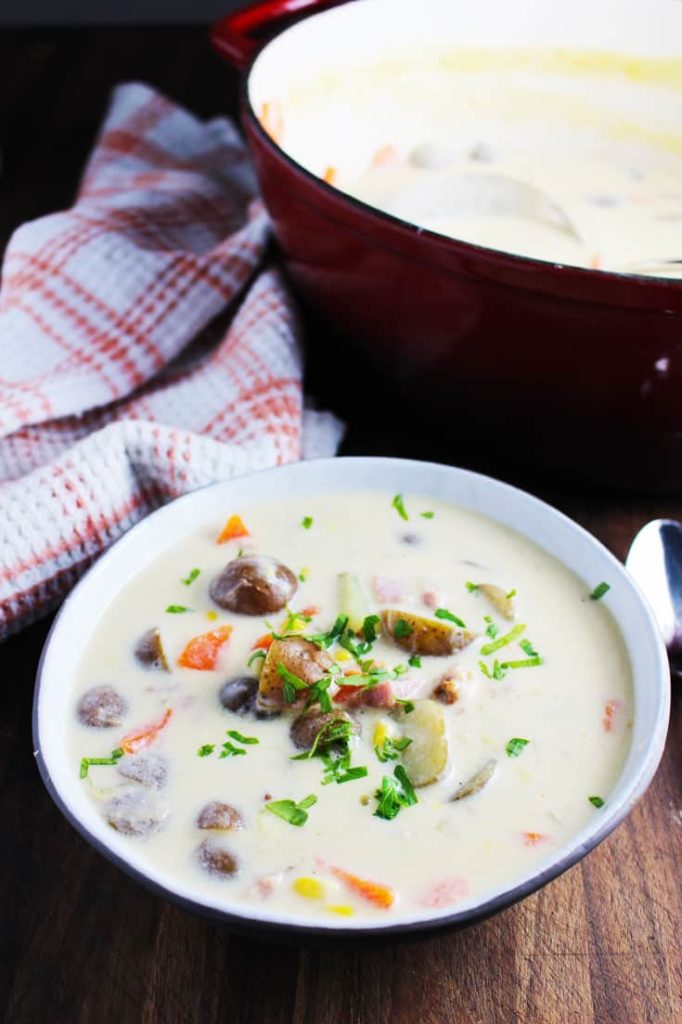 And if you STILL have some ham left after this, the solution is clearly the dreamiest sandwich ever: a croque monsieur. OR this ham and cheese quiche I contributed to Coco & Ash a few weeks ago.

Let's talk about this soup. I'm a huge fan of chowders of all kinds. In fact if you've been following this blog for a bit, you might know that soup-as-a-meal happens pretty much weekly around here.

This one is great because it's luscious, hearty, a little meaty, and somewhat healthier than your usual chowder, since I use evaporated milk (not at all the same as condensed milk!) instead of cream.

If you've never tried this, it's one of my very favorite tricks for reigning in the fat with zero impact on texture or flavor. To be honest, I rarely go out of my way to cut the calories from anything, but this little sub is 1) cheaper, 2) just as easy, and 3) just as good. WIN.

How do You Make Potato Chowder with Corn and Ham? 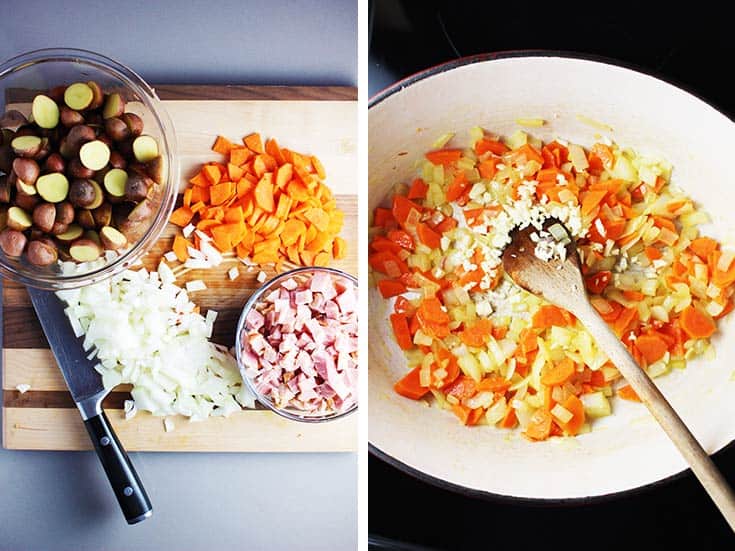 3. Add the potatoes and ham.

4. Stir in some flour and cook for a couple of minutes. 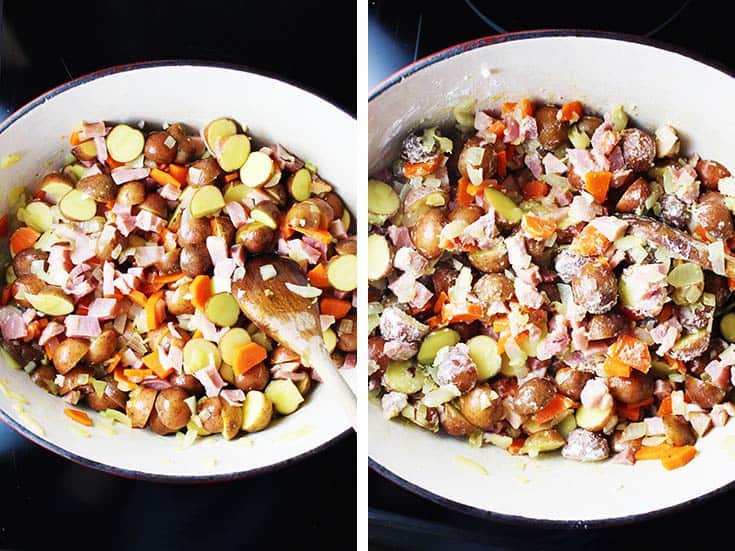 6. Bring to a simmer, and let bubble for 15 minutes, until potatoes are tender.

7. Stir in frozen corn and heat for a couple of minutes. Season to taste with salt and pepper. 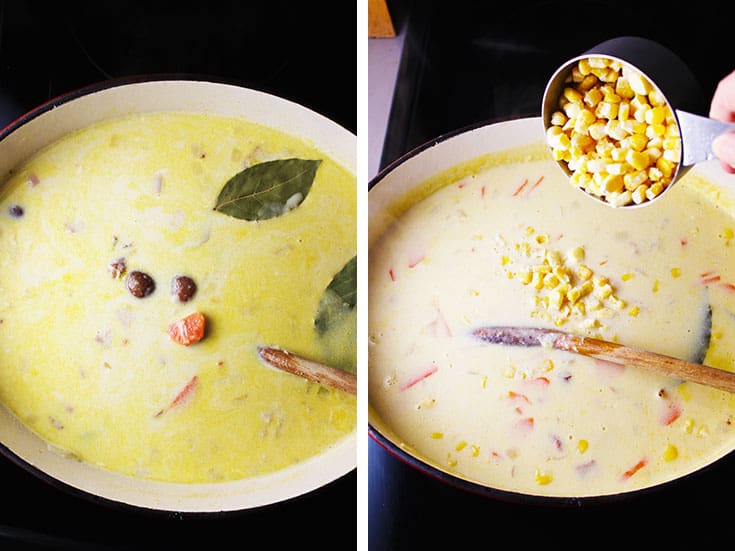 8. Ladle into bowls and garnish with parsley if desired.

Sound good to you? If you make this potato chowder with corn and ham, I would be thrilled and honored if you would take a pic and tag me on Instagram @ourhappymess! 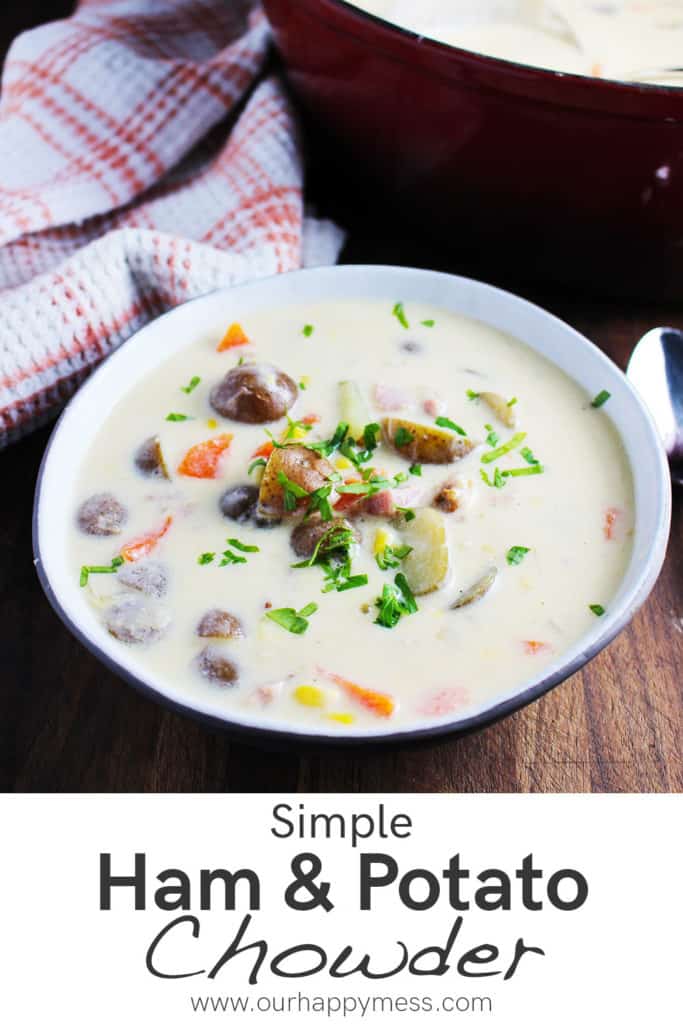 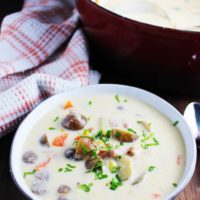 Potato Chowder with Corn and Ham