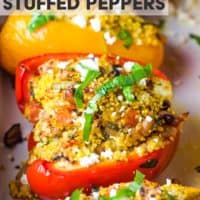 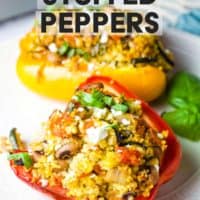 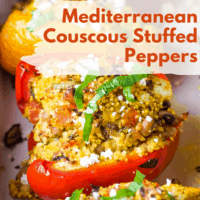 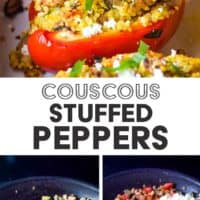 Vegetarian Mediterranean stuffed peppers with couscous are easy to make and packed with fresh flavor. Perfect as a main or side, they are as nutritious as they are delicious!

Ok, so these are not your typical retro American stuffed peppers with ground beef and rice. (Those are great though, right?)

Think of this as an updated classic. I discovered how deliciously versatile stuffed peppers could be when I made these Tex-Mex-style vegetarian stuffed peppers.

And judging by how popular they've become on Pinterest, we're on the stuffed pepper wagon together, you and I!

So these Mediterranean couscous stuffed peppers are yet another riff on that venerable classic.

This time we're using couscous instead of rice, black-eyed peas instead of beef, some salty feta, fresh basil, and a bunch of other stuff that's going to infuse these with MAXIMUM flavor.

What to Serve with Stuffed Peppers

Stuffed peppers are super versatile in that you can serve them either as a main or as a side.

To stay in the Mediterranean flavor zone, try them with a big Greek salad. Skip the chicken to keep things vegetarian. Or they'd be great on the side of some Mediterranean black bean burgers or some black bean soup.

If you're not worried about staying veggie, these also go really well with a grilled chicken breast, some lamb chops, or a juicy herb-marinated steak.

Honestly, though? Stuffed peppers are an all-in-one meal. You've got your starch, your protein, and your veggies all in one delicious package. So don't stress about sides. I rarely do, and nobody misses them :).

What Color Peppers are Best for Stuffed Peppers?

Bell peppers are used for classic stuffed peppers, but if you thought all colors were the same, that's actually not the case!

Although it's all the same plant, green peppers are the unripe version. Peppers get redder and sweeter as they ripen.

This means that, in order of sweetness, red are the sweetest, followed by orange, then yellow.

Green bell peppers are traditionally used with the classic meat, rice, and tomato sauce filling because they're the most savory and least sweet of the colors.

For the flavors in these Mediterranean stuffed peppers, I prefer the sweeter varieties. But they are all great, so I just mix them up for eye appeal. If green is what you can get though, go for it!

And if you've ever wondered why green peppers are always cheaper than the other colors, well it's because they grow for less time before being harvested so they use less water and other resources!

How to Make Mediterranean Stuffed Peppers with Couscous

I love to squeeze some fresh lemon juice over them and drizzle with some olive oil before serving.

A little extra feta and fresh basil never hurts either.

If you love classic Mediterranean flavors, you will love these couscous stuffed peppers!

CAN I FREEZE STUFFED PEPPERS?

YES! Just fill the peppers and pop them into a freezer bag, press out as much air as you can, and freeze for up to 3 months.

Bake the peppers from frozen, covered with lid or foil, in a 400 degree oven for about 1 hour. Remove the lid or foil and bake an additional 10-15 minutes. 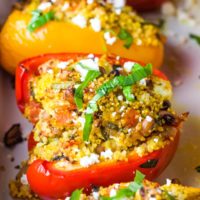 Freezing the peppers Fill the peppers and pop them into a freezer bag, press out as much air as you can, and freeze for up to 3 months.  Bake the peppers from frozen, covered with lid or foil, in a 400 degree oven for about 1 hour. Remove the lid or foil and bake for an additional 15 minutes.