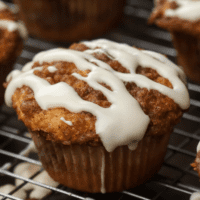 Tender, buttery cinnamon roll muffins are filled and topped with cinnamon and brown sugar and drizzled with a cream cheese glaze for an indulgent breakfast or snack.

It took me a few tries to get this one right, but boy was it worth it!

Cinnamon rolls are one of my very favorite things, but I usually leave it to to someone else to make them, since they are, in all honesty, a bit of a pain.

But not in muffin form!

No yeast. No wasting time clearing the clutter from your counter for rolling space (just me?).

Most importantly, no waiting for hours for your cinnamon roll fix.

Admittedly, these muffins are not really of the "healthy" variety. If you're looking for those, try these healthy raspberry muffins or banana oatmeal chocolate chip muffins instead.

Actually, my husband questioned whether a muffin with "frosting" could reasonably be considered breakfast food. Fair point.

But let's not get carried away with semantics! I will leave it to you to decide what they are and when to eat them.

The simple sweet and tangy cream cheese glaze I used to drizzle these muffins and complete the cinnamon roll flavor profile is the same one used in this cranberry orange muffins recipe.

These muffins are layered with cinnamon sugar and drizzled with a cream cheese glaze, the main components that make cinnamon rolls what they are.

Unlike a real cinnamon roll, cinnamon roll muffins require no yeast or waiting time, they're quicker, easier, and basically have all the flavors of cinnamon rolls in less than 40 minutes.

Most of the ingredients in this recipe are nearly identical to those in a cinnamon roll. The main difference is that muffins, considered 'quick-breads', are leavened with baking powder instead of yeast.

This recipe calls for unsalted butter that has been melted and cooled. During the mixing of the batter, butter coats the proteins and starches, resulting in a finer crumb.

Because melted butter has already released a significant portion of its water content, the finished treats are soft and dense, as well as flavorful.

A neutral oil like vegetable or canola oil will also work, but I love the flavor of butter in these muffins.

Note: Make sure you have cooled down your butter down for a few minutes or you might end up with scrambled eggs.

The sour cream in this recipe gives the muffins a rich taste and and keeps them moist. You can also substitute this with an equal amount of full fat plain yogurt.

Buttermilk is another option, though lower in fat than sour cream, so the muffins will be less rich.

Given this is a no-yeast recipe, a leavener is needed to help the muffins rise. Baking powder works as the leavener in this recipe.

You probably already have most of the ingredients for these cinnamon roll muffins in your pantry and fridge. So let's make them!

2. Add the cold butter in the bowl and work it in the cinnamon sugar with your hands. Set it aside.

3. Take a large bowl and mix the eggs, sour cream, milk, melted butter, and vanilla extract. Whisk together until smooth.

4. In another bowl, take the flour, sugar, baking powder, and salt. Mix it well.

5. Add the dry mixture to the wet ingredients and stir it gently with a wooden spoon or rubber spatula. The batter will be thick.

6. Grease a standard muffin tin and line it with muffin cups. Pour about two tablespoons of the muffin batter in each cup. Add about 2 tablespoons of filling on top.

7. Cover the filling with another 2 tablespoons of batter, and sprinkle with the remaining filling.

11. In a medium bowl, mix together the cream cheese, butter, vanilla, and powdered sugar. Beat in the milk 1 tablespoon at a time until you reach a drizzling consistency.

12. Drizzle the glaze on top of the baked muffins.

When it comes to measuring flour, you can either weigh it (my preferred method!), or use the "spoon & level" method.

To use the "spoon & level method, use a spoon to scoop flour into a measuring cup, and then using the back of a knife, level off the measuring cup.

Do not use your measuring cup to scoop out the flour. This results in the flour being packed into the cup, and too much flour being added to the recipe.

Too much flour leads to baked goods that are tough, hard, and dry.

What are cinnamon roll muffins?

Cinnamon roll muffins are the muffin version of the loved cinnamon roll made without a yeasted dough. They are filled with a cinnamon sugar filling and topped with a cream cheese glaze.

How do you make your muffins fluffy?

Use room temperature ingredients. When eggs and dairy are at room temperature, they combine to form a smooth mixture that traps air and expands when heated in the oven. Your muffins will be fluffy and light as a result of this expansion.

Why are my muffins dry and dense?

One of the major reasons your muffins might turn out to be dry and dense is because you might not be adding the correct amounts of ingredients. Make sure you are measuring your flour (see spoon & level tips above) and all other ingredients properly. Over-mixing your batter can also lead to muffins that are too dense. Mix by hand and only until just combined.

Can I make the muffin batter ahead of time?

Yes! Make the batter and keep it in the refrigerator until you're ready to bake. To avoid dense muffins, bake your muffins within the next 24 hours. In order to bake, spoon the batter into muffin tins and bake them for 12 to 15 minutes. The batter does not need to be stirred.

Can I freeze these muffins?

Yes you can! Wrap each (unglazed) muffin in plastic wrap and then store the muffins in a freezer bag once they have cooled completely. Take a muffin out of the freezer and let it sit on the counter for at least an hour to properly thaw before serving. In addition, muffins can be microwaved in 15-second increments.

How do I store Cinnamon Roll Muffins? 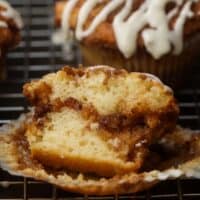