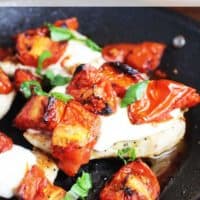 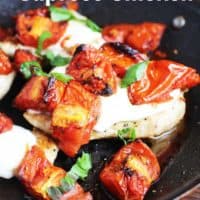 This cheesy caprese chicken recipe with roasted tomatoes is easy and quick to make. Serve it with buttered noodles or a green salad for a simple, flavorful weeknight meal.

Disclosure: This post contains affiliate links. If you make a purchase through one of these links, I will make a small commission, at no cost to you. I will never recommend anything I don't personally use and love! 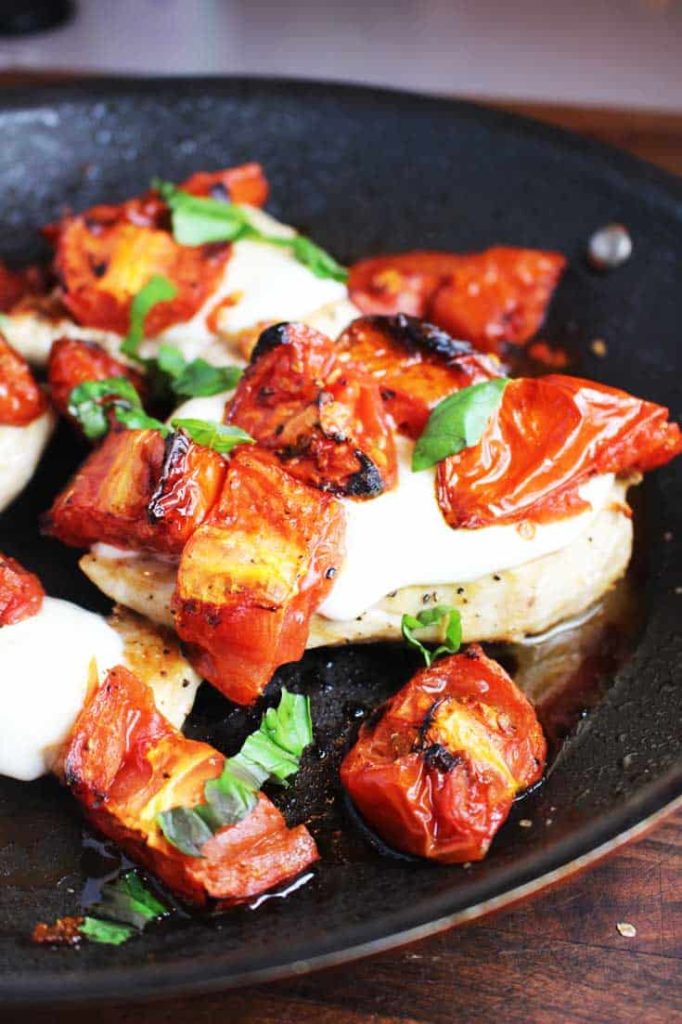 Friends, welcome to the first recipe of 2018! I don't really make resolutions, but I do have some goals for this year. And many of them center around this 'lil blog, so expect to see more of me around here!

2017 was a tough one, on both the personal and global front, I won't lie. So many illusions I had were shattered in the latter part of 2016, and 2017 was about picking up the pieces and licking my wounds.

I want this new year to be about using the strength I've gained from these harder times to build a life I can be really proud of. "Intentional" is a trendy word that I don't want to overuse, but I will use it here, this one time.

To make things happen, you have to be intentional about it. So I'm starting this year off with clear goals, and actual plans on how to reach them. This may be a first for me 😉

My bestie got me this cookbook for Christmas, Yum and Yummer by Greta Podleski. If you're not Canadian, you may not be familiar with the Podleski sisters, Greta and Janet, but they are authors of three great cookbooks that center around low-fat recipes that don't compromise on flavor.

With Yum & Yummer, Greta is striking out on her own, but keeping that same philosphy. 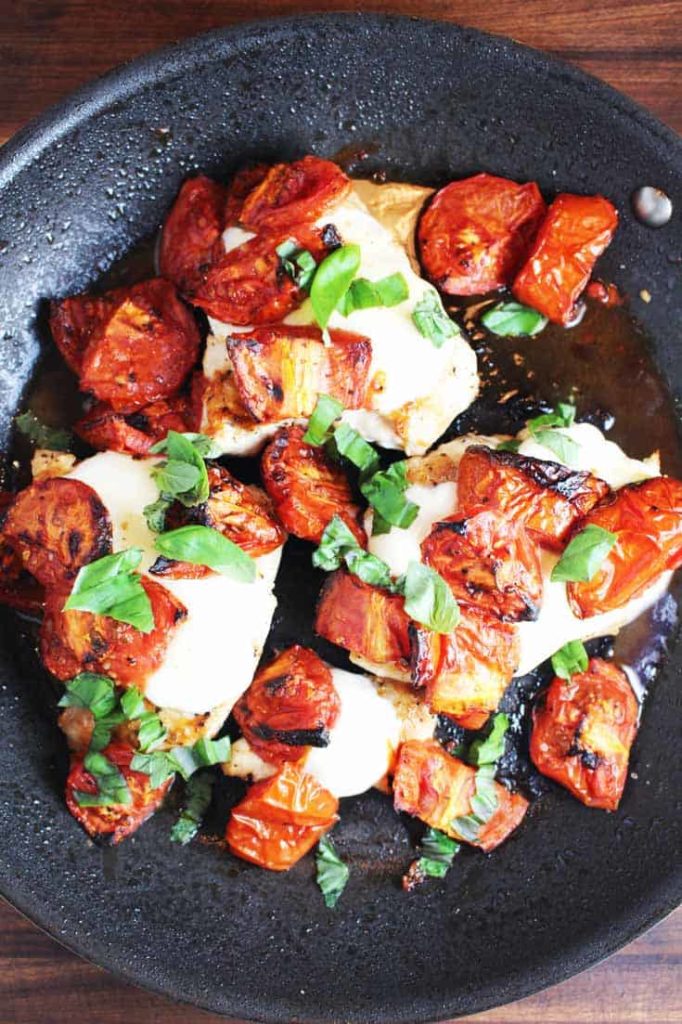 Like everyone else, I always try to start the new year by trimming some of the excess out of my life, both metaphorically and in my cooking. If I have to pick a cookbook to help me do it, this is it!

As a bonus, if you're into videos, this book has a video to accompany every single recipe. First time I've seen this, but what a great idea. For now the book seems to be only available in Canada, but hopefully will be distributed more widely soon!

The first recipe I have tried from the book is this cheesy caprese chicken recipe. It was so. good. And easy!

First, you roast up some tomatoes (the best way to get some flavor out of these dreadful winter tomatoes). Meanwhile, you make a simple balsamic reduction (if you're wondering why you don't see it in the photos, it's because I forgot it on the stove. Typical.).

Then you pan fry some chicken breasts, and melt some fresh mozzarella on top. If your skillet is oven-safe, you could pop in under the broiler for a minute. This non-stick skillet has basically changed my life. 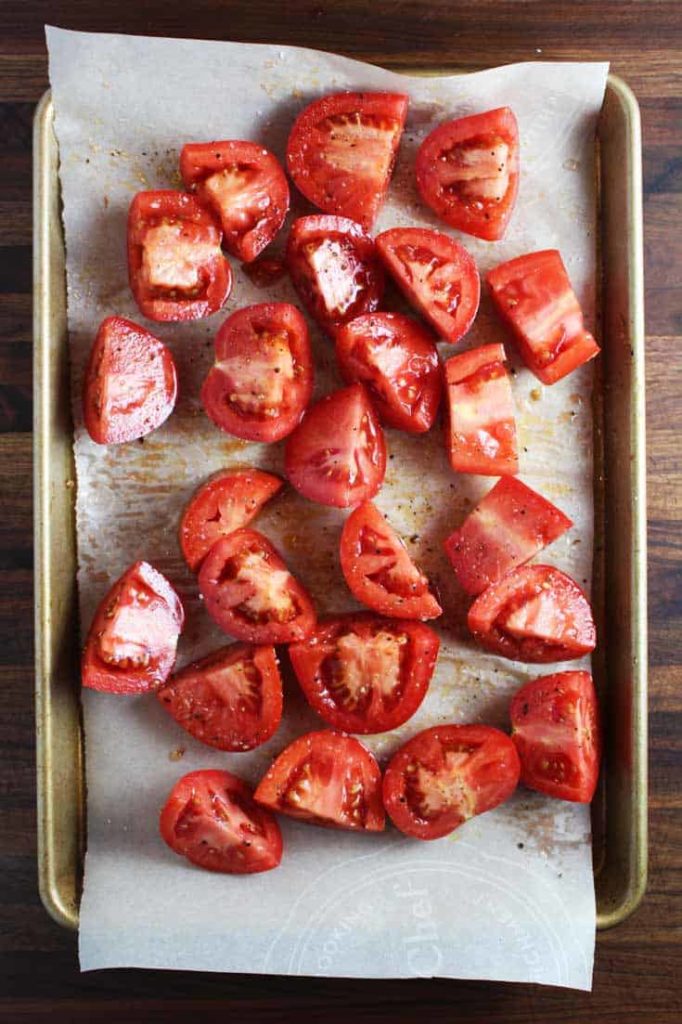 I served this caprese chicken recipe with buttered spaghettini, but you could go with just a nice green salad, to keep it lighter. 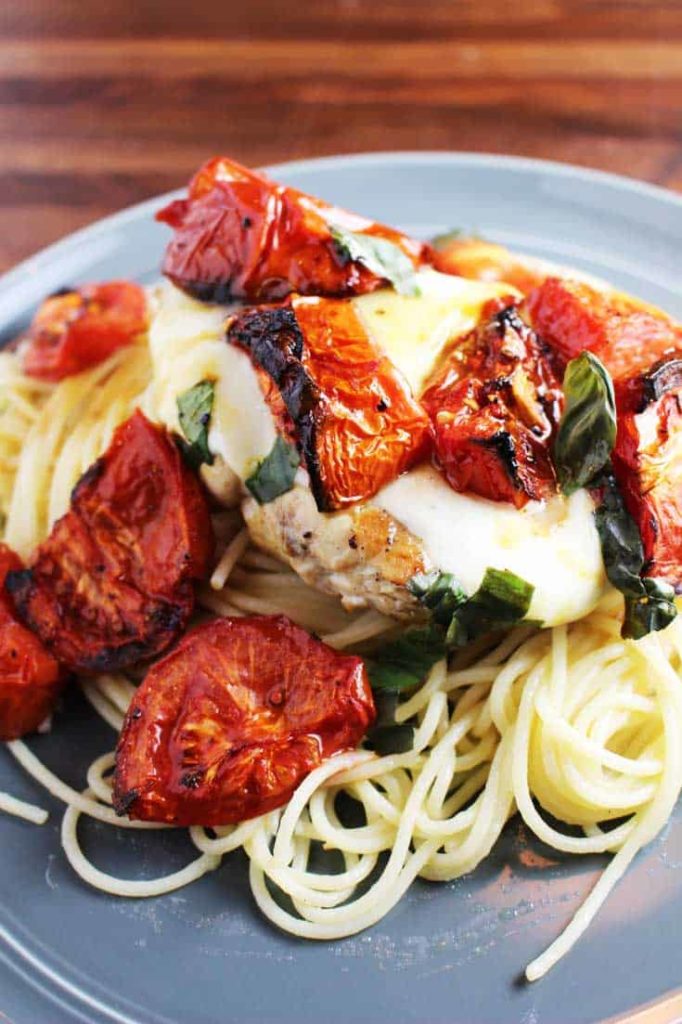 As recipes go, this caprese chicken recipe was low-stress, and quick and simple enough to make on a weeknight. I don't really have a recipe "rotation" going on around here, but this one is likely to make a frequent appearance on the menu! 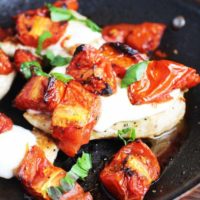